Manchester Camerata has made its UpClose series into a brand in its own right these days, and in the Gallery space at HOME, Manchester’s theatre-cinema-gallery-arts centre and its new artistic partner, it had a venue for ‘Pocket Symphonies’ that no doubt brought an enquiring set of new ‘experience seekers’, too.


What they found was a sequence of music tracks realized by their composer, German creative wizard Sven Helbig, the piano quartet parts played live under his direction by Camerata’s Adi Brett, Ann Beilby, Hannah Roberts and Simon Parkin, alongside film created and curated by HOME’s own Chris Paul Daniels.


That sounds pretty prosaic, but it was an experience that held attention for most of its about one-hour duration, and the magic was in the marriage of the music and the visuals – many of them archive footage with a nostalgic twist, or (in one case) time-lapse shots of familiar scenes in our own busy-bee city, woven into fascinating tapestries of superimposition.


Biggest hit on the night was one dominated by images of speed along a railway track, matching the pounding moto perpetuo of the score, which they decided to make into an encore, too.


Helbig described his work – which is on an existing album, played by full orchestra and piano quartet – as a ‘song cycle’, and I guess that’s what it is, if you think songs-without-words. (Symphonic they are not, though in one or two I wondered whether ‘Pocket Passacaglias’ might have fitted, with their chaconne-style variation of an underlying four-bar unit, or sets of units).


But hey, the man comes with imprimatur of the Pet Shops Boys and Snoop Dog, among others, as well as classical outfits, so you know he’s not an idiot. He can certainly write effectively for piano quartet, and his music can be plaintive, or hyper-energetic, or loads of other things, and is very appealing (tonal all the way) within its album-track dimensions.


Is this the way to woo listeners into the classical world who find traditional symphonies too long? Well, at one point (just before the railroad track) I thought perhaps an hour of one similar-length piece after another was going to be too long. But music with something to look at is another genre, anyway – maybe even a kind of Gesamtkunstwerk – and if Wagner could do the maxi version, Sven can do the mini. 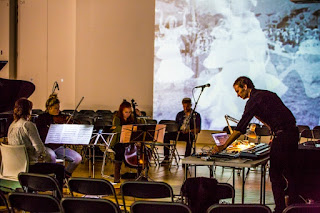