Premiered in 1933, The Silver Lake was the last theatre work Kurt Weill completed before being forced out of Germany by the Nazis. His collaborator was Georg Kaiser, a gifted playwright who was very successful in the Weimar Republic era, and it’s altogether a more poetic and fanciful creation than most of his work with Berthold Brecht.

The fast-moving succession of scenes (with a narrator to make sure you don’t miss anything) nonetheless convey a clear social message. It begins with the poor and hungry queuing for inadequate handouts because they can’t afford the food shops’ prices, and quickly points out that this is because capitalism dictates that prices must remain high, even if the food itself is getting thrown away to ensure that demand outstrips supply.

A crowd bursts into a shop and loots it, but the character on whom we focus, Severin, takes just one rare thing: a pineapple. He’s shot in the leg by policeman Olim, who’s racked by guilt but tells himself he can’t afford to help him – until he wins the lottery and becomes a rich man.

He takes Severin into the castle he has now acquired and seeks to make amends, but the two of them, once reconciled, are cheated out of their property by their housekeeper, a survivor of the old nobility (with help from her baronial friend). They are dispossessed and head for the land where justice reigns, across the Silver Lake which miraculously freezes over to grant them passage.

This was enough to ensure the Nazis got the show closed after two weeks, and Weill was soon on his way out of the country.

The piece is subtitled ‘A Winter’s Tale’, and in some ways is a fairy story. With spoken dialogue and narration, it’s in the ‘Singspiel’ tradition (the German equivalent of a musical), like The Magic Flute – and Weill’s rich and multi-coloured score, requiring an  opera-quality chorus and using some of Mozart’s devices, too (such as a chorale with a walking bass, for the final journey) is a many-splendoured thing.

English Touring Opera’s artistic boss, James Conway, is the director, and Kurt Weill expert James Holmes (well known to Opera North devotees) conducts. Such resources as ETO has to throw at a project are visible here, with quite an elaborate set by James Wiltshire, including screen projection, and the stage is peopled, in addition to its 14 credited singers, with members of Streetwise Opera’s groups involving homeless people.

The narration and spoken dialogue are in English, and Conway and Holmes have put the choral numbers into English, too, but the solo ones are in the original German … a bit odd, that seems; but with English surtitles for both on display, both electronically and in placards held up by the cast from time to time, we don’t miss a thing.

ETO have done a great job with this rarity and should be congratulated. There’s a quality line-up of principals, with Ronald Samm as Olim, David Webb as Severin, Clarissa Meek as the nasty housekeeper Frau von Luber and Luci Briginshaw as her poor relation Fennimore, and Bernadatte Iglich takes credit as both choreographer (yes, there’s dancing in it, too) and narrator. 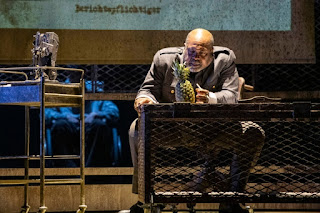 Posted by Robert Beale at 05:18 No comments:


This is the piece of which Emperor Josef II reportedly said there were ‘too many notes’ – at least as represented in Peter Shaffer’s Amadeus.

What he actually said should probably be translated as ‘an awful lot of notes’, or ‘a vast amount of music’, which is pretty accurate. It’s a story where very little happens but there are wonderful things in the score.

Josef might have been disappointed in the lack of action. He was much more keen on ‘Singspiel’ (a play with music, the 18th century equivalent of light opera or musicals, which is what this is) than all-sung opera, with its elaborate ensemble numbers and reflective arias.

The story is almost a cliché of its time: hero seeks and must set free a beautiful girl held captive by a big, bad villain. Except here there are two heroes and two pretty girls – the noble Belmonte and his sidekick Pedrillo, seeking lost loves Konstanze and Blonde, respectively, both held in the harem of Pasha Selim (who rather fancies adding Konstanze to his collection of wives) and guarded by Osmin (with similar designs on Blonde).

The ‘abduction’, or escape attempt, comes unstuck, but it turns out that the Muslim Selim has a bigger concept of honour and mercy than the European and therefore ‘Christian’ would-be escapees, and he finally sets them free anyway.

There’s room for fun along the way in presenting the story, which director Stephen Medcalf and his cast do in near-pantomimic style, and which the audience (witnessing it in English and with English surtitles on screen just in case they’re hard of hearing) much enjoy.

And in that multitude of notes, Mozart supplies plenty of lovely music and not a few operatic ensemble pieces. In fact, the major part of the second Act (broken here with the interval at the point where Pedrillo is about to get Osmin drunk) consists simply of two arias by Blonde framing a central section made up of two by Konstanze.

It’s at this point we realize that one of the concepts brought to the piece by Medcalf and designer Adam Wiltshire is that the harem is a collection of caged songbirds: it’s represented by two metal frameworks, closed at the top, and with mirrors to make the modest number of human resources available to English Touring Opera (just two additional girls and two guys) represent a crowd.

That’s one side of a two-part set placed on a central revolve, which does its job very well. The need to get eight voices on stage for choruses brings the occasional incongruity (near the beginning Pedrillo, having said he’ll ‘quickly hide’, comes right back on to sing in one of them), but it’s a price you pay for opera on this scale.

The principals do a fine job: Richard Pinkstone (Pedrillo) is a strong singer with a good comic gift, and John-Colyn Gyeantey brings tenderness to his tenor role; Matthew Stiff (Osmin) reaches for the low notes effectively. The girls (Lucy Hall as Konstanze and Nazan Fikret as Blonde) are very good, especially once warmed up for that feast of vocal art in the second Act. Alex Andreou delivers the spoken role of Pasha Selim with studied gravity.

And John Andrews’ conducting gives us pleasant variety of tempo and generous helpings of ‘Turkish’ colour from the pit. 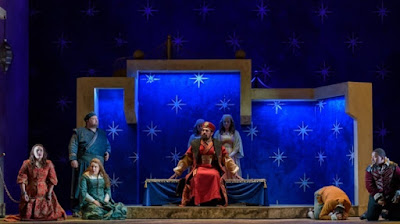 
Without Sir Mark Elder, and without Alice Coote and Paul Nilon, the originally advertised mezzo and tenor soloists, the Hallé performance of Berlioz’ Roméo et Juliette was still a magnificent undertaking and magnificently accomplished.

Julie Boulianne, the French-Canadian mezzo who sang Marguerite for Glyndebourne’s The Damnation of Faust and Mary for the Hallé’s Proms performance of The Childhood of Christ in the summer, became Juliette and the widely experienced tenor Yann Beuron her Roméo: Laurent Naouri took the bass-baritone role of Friar Lawrence as advertised.

And Ludovic Morlot stepped in as maestro. It’s a strange and sprawling work, almost proto-Wagnerian in its combination of programme-symphony and quasi-opera (Berlioz called it a ‘dramatic symphony’), and the dramatic element in it is the key to its successful realization.

What came across most impressively in this performance was the quality of the preparation done by the ‘home’ teams of Hallé Choir, Royal Northern College of Music Chamber Choir and orchestra, as much as that of the invited soloists.

Berlioz chose the human resources for this creation just as he wanted – no more and no less. Four harps, four bassoons, a prominent role for the cor anglais, multiple percussion and an ophicleide distinguish the colours of the orchestra; the choral music is sung by a three-voice semi-chorus (alto, tenor, bass) in which the women are distinctly a minority – giving many of the sounds a darkened hue appropriate to the tragedy unfolded.

Yet as the music begins the strings are in spirited mood, lending the representation of internecine strife on the streets of Verona a near-jolly aspect. The opening narrative introduction to the story (told by semi-chorus and soloists in a completely original recitative style) has a kind of bardic accompaniment for the harps and six harmonious cellos, which lends the flavour of times long ago. And the Capulets’ ball gets going at considerable length, with distant-sounding percussion, as if we’re eavesdropping on events playing out off-stage, almost in real time.

The large chorus take no part in proceedings until Juliette is unconscious, and seem to represent members of the two warring factions – for this performance the Hallé Choir entered colour-coded in red and green sashes, to underline the point. Ultimately, despite trying to argue with Friar Lawrence’s plea for reconciliation, they agree he’s got a point and, joined by the other singers, finally hail the virtue of forgiveness and vow to be ‘Amis!’ in future.

The weakness of its presentation of the story lies in the words of the verbal sections, which are nothing like Shakespeare’s and at time effusive to a degree, and musically Berlioz’ attempt at a programme-symphony is a compromise between formal structures (an expositional opening, a slow-movement love scene, the often-extracted ‘Queen Mab Scherzo, based on a single phrase from the play), and the need to be theatrical.

To his enormous credit, Ludovic Morlot moved it all along smartly, obtained some gorgeous playing from the orchestra and pumped up the tension in the Finale, when it could so easily have seriously sagged.

Congratulations to all on a considerable achievement, one of those that have been the highlights of Hallé seasons in Manchester for many years past, and hopefully will be for many years to come. 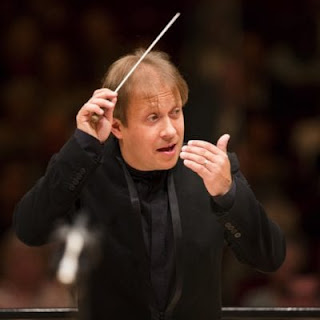 Posted by Robert Beale at 07:27 No comments: