I don’t usually review CDs except at Christmas, but one new release has really caught my imagination. It’s the sound of the grand organ of Notre-Dame de Paris, played by Olivier Latry, captured in January this year.


And its magic, and poignancy, arise from the fact that it’s a sound that probably won’t be available to hear ‘live’ for some time to come.
Reports say that the unique and extraordinary five-manual organ – incorporating pipes from hundreds of years ago but still essentially the greatest Aristide Cavaillé-Coll ever built – was not destroyed by the fire at Easter, but that a lot of dust, and some water, have got in.
It’s a cause for relief that things were no worse, but the two most damaging things for pipe organ mechanisms are, of course, dust and water. Cleaning will no doubt have to be extensive – and there is still the question of how, and for how long, the rebuilding of the cathedral roof will be in progress.
Latry made this CD as one of a series for the adventurous French label La Dolce Volta – it has a whole variety of very personal albums by great artists to offer, particularly pianists and chamber musicians – and called it ‘Bach to the Future’.
It’s his idea of how Bach’s organ music can be made to sound using the resources of the great Cavaillé-Coll instrument. Forget ‘authenticity’ – playing Bach this way is a tradition in itself – Louis Vierne recorded some on this organ back in 1929, and Latry says he thinks of Liszt’s way of transcribing him, too.
The big blockbuster pieces sound quite overwhelming here: listen to the opening of the great G minor Fantasia and Fugue, or the Toccata and Fugue in D minor, for instance. But there are others in which he exploits different aspects of the instrument: the gentle string sounds in the Herzlich tut mich verlangen (‘Passion chorale’) prelude, or the soulful prelude on Erbarm’ dich mein, O Herre Gott. The Notre-Dame organ even has a set of chimes that play on the pedals, and so he ding-dongs his way through In Dir ist Freude from the Orgelbüchlein.
For the three-movement G major Piece d’Orgue he finds a set of French plein-jeu and grands-jeux sounds (and makes no apologies for a long and huge crescendo in the middle section), and in the Ricercare a 6 from The Musical Offering he solos some of the lines on particular manuals. The Passacaglia and Fugue in C minor is a tremendous essay in build-ups.
In a way he’s having fun – most of these pieces are ones that organists love to play and organ music fans love to hear, and they sound terrific played on almost anything, but even more so on the great music machine of M. Cavaillé-Coll.
The presentation of the album is luxurious, with its own little box and a lavishly illustrated booklet.
La Dolce Volta say they are planning to donate part of the profits from this CD to the reconstruction of the cathedral. 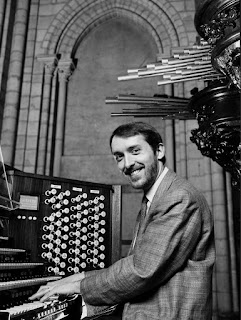 Olivier Latry at the organ of Notre-Dame de Paris
Posted by Robert Beale at 03:53 No comments:

Jonathon Heyward expertly piloted the orchestra that bears Charles Hallé’s name through the first of its April ‘Opus one’ programmes last night (it’s repeated tonight and on Sunday in Manchester, and on Friday in Blackburn).


Hallé was born 200 years ago this week – we now know that his real birthday was 10th April 2019, though he celebrated it on the 11th, his baptismal day. (I was a bit miffed that someone changed my programme note in this respect to make it inaccurate, but the ‘Timeline’ supplied alongside it, provided on the basis of information I’ve previously compiled for the Hallé memorabilia exhibition now at Central Library here in Manchester, kept the correct date).


Hallé was never really rated as a composer in his own day (he was famous for so much else!), but he did publish a number of piano pieces of his own creation, and for this week’s concerts his orchestra is playing a compilation and orchestration based on two of them by Christoph Wagner, recently composer-in-residence at Hagen in Germany, Hallé’s birthplace.


This was a beautiful example of re-animation in its own right. Wagner has re-written the figuration in Hallé’s Souvenir to make it more orchestral in concept – and introduced some telling imitation and counter-melody, too – with the result that you feel you’re hearing an unknown piece of Mendelssohn for its brief duration. It begins in A minor but changes to major at the end, making a perfect lead-in to Hallé’s Scherzo in D, his one published piece of ‘heavyweight’ piano writing.


Here it is Beethoven we feel we’re hearing, and we should hardly be surprised, as Hallé championed Beethoven’s works – piano and orchestral – all his life. Again Christoph Wagner imaginatively and subtly creates something multi-coloured and varied from Hallé’s piano textures, with its own moments of suspense and drama. Jonathon Heyward caught the spirit of it immediately and very effectively.


Of course that was not all this concert had to offer. It began with real Beethoven, the Leonora no. 3 overture, played with the full body of strings (but old-style timps) and brassy and full of vivid contrast in its livelier moments.


Then the orchestra was pared severely down for Mozart’s Piano concerto no. 17 K453 – two sets of eight violinists, six violas, four celli and three bassi. That was an excellent decision, giving soloist Heejae Kim, winner of the 2015 Terence Judd Prize, the chance to deliver the solo with delicacy, style and charm. Jonathon Heyward found some interesting robustness in the ritornello at the start of the slow movement – and every bit of whimsy in what followed – and I loved the delightful clipped articulation in the orchestra in the finale, counterbalancing the equally dainty piano performance.


Heejae Kim returned with a brief encore – Sibelius’s Le Sapin (The Spruce) – providing a forward glimpse towards the end of the concert.


This was great Sibelius – Symphony no. 5. Heyward and the Hallé gave us in effect a two-movement work, the Andante segue-ing into the finale to balance the double introduction-scherzo structure of the first movement. There were brilliant colours (some guesting woodwind players doing their best to make an impact) and a great sense of momentum allied to finely controlled tempo transitions, with assured phrasing and tenderness in the slow movement and a sense of inescapable logic in the progression of pregnant dissonances to final resolution at the end. 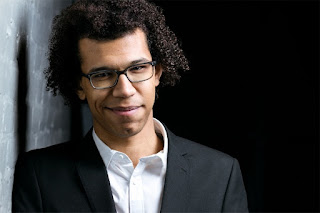 Review of RNCM's The Pilgrim's Progress

The Royal Northern College has come up with a fine piece of theatre with this year’s spring opera. They last did Vaughan Williams’ The Pilgrim’s Progress 27 years ago, and I saw it then, but it’s a great piece for a conservatoire to tackle, with multiple supporting roles as well as the main one of the title, and some excellent opportunities for gifted performers to shine in them.


This production has all that – particularly in the ‘Vanity Fair’ scene that opens the second act – but it has much, much more. The story has been re-interpreted as an allegory of a soldier’s life from the First World War – a soldier who is shell-shocked and has to battle with his memories of the horror as much as the hypocrisy and opprobrium of those back home, but triumphs in the end.


It works remarkably well, and Jonathan Cocker’s concept and direction are inspired. He’s helped by a haunting single-set design concept from Bob Bailey (the vivid period costumes are his as well) in which the foxhole in the trenches of the opening transforms to a field hospital, a town in Blighty or the long hard, road to Zion as required.


It could be Vaughan Williams’ own memories of the Great War brought to life: he served as a medic after volunteering in early middle age, and chose the story himself for what many consider his best full-length opera, working on it for years before its post-Second-World War premiere. In this production the angels are nurses and those who point the way to salvation are doctors and their aides; Pilgrim’s armour is a tweed suit as he seeks rehabilitation, Vanity Fair is a gathering of grotesques beneath the flags of patriotism, and Mr and Madam By-Ends are the callous wealthy.


The battle with Apollyon presents the dragon as a human phalanx but looking horribly like a huge artillery piece, and the dead emerge from the set to haunt the hero even while his soldier mates wander fearfully in the war-torn landscape.


It’s also excellently sung. The RNCM seems to have a glut of extremely good male singers at the moment, and there are many different chances for individuals to shine. I saw baritone Edward Robinson in the title role and have nothing but praise for his performance, and likewise with Liam Mcnally’s appearance as the writer in the prologue and epilogue.


William Kyle was powerful as the Herald (here a Mr Mayor back home); Kamil Bien impressed with a mature tenor timbre in his roles as Interpreter (in this case a medic) and Messenger in the wartime hospital scenes; Steffan Owen stood out for his singing and his characterization as Lord Hate-Good (now, with the text as cue, a be-wigged and merciless judge).


There were excellent performances, too, from Stephanie Poropat, Lucy Vallis and Rhiannon Doogan is the Shining Ones, Stephanie Maitland as Madam By-Ends (with Ryan Davies as Mr), and a whole variety of roles in Vanity Fair.


David Parry pilots it all with a sure hand in the pit, and the chorus singing – they’re trained by Kevin Thraves – is magnificent. 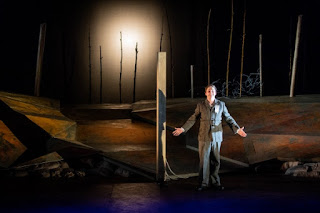 Edward Robinson as the Pilgrim - picture: Robert Workman
Posted by Robert Beale at 09:02 No comments: