This week’s Hallé ‘Opus One’ set of concerts is notable not just on account of the soloists (Benjamin Grosvenor for Beethoven’s Piano concerto no. 3, Jonathan Scott for Saint-Saëns’ Organ Symphony) but because it’s the first full-length main series programme in the Bridgewater hall conducted by Jonathon Heyward since his appointment as Assistant Conductor.


He’s a very gifted exponent of the art of the baton, and if his style with the Hallé reminds you a bit of Sir Mark Elder’s, that’s no bad thing at all, as it means that he’s gained a lot from his mentor and that he appreciates exactly what works with the Hallé Orchestra.


I noticed he had the traditional strings layout, with cellos on the front stage right and all the violins together on the left, for his programme of Weber, Beethoven and Saint-Saëns: their sound was well focused and precise.


From the start it was clear that he can bring a sense of quiet tension to the opening of a piece such as the overture to Oberon, where a horn call from out of the silence, and shimmering strings, is a magical effect. By contrast, the allegro had poise and brilliance, the strings precise (led by Lyn Fletcher) and the woodwind crisp and pointed.


The same touch was there in the Beethoven concerto (especially the final orchestra ritornello of the first movement), and Benjamin Grosvenor’s solo playing was deeply satisfying – touches of poetic longing mixed in with a strict sense of flow and balance of question-and-answer in the phrasing.


The slow movement struck a note of rapture (orchestra and soloist) and the finale was elegant and fleet-footed, and finally exuberant. For a solo encore we were treated to one of Grieg’s Lyric Pieces – Erotik, I believe, in name and a cool, Norwegian sort of erotica but very beautiful.


The Organ Symphony, Saint-Saëns’ no. 3, is a bit of a war-horse but extremely popular for the noise it makes. Jonathon Heyward, however, again found subtlety in it, and he brings a narrative quality to the music he expounds, along with a clear sense of the counterpoint that’s there to be found in the orchestral writing (as well as the big, blockbusting chords).


There was no empty grandiosity in either his approach or that of Jonathan Scott, with momentum in the rhythms and clean, vigorous orchestral playing. Jonathan Scott knows the Bridgewater Hall organ probably better than most, and made its firm but mellow pedal sound tell in the slow movement and its ‘beating’ tones blend well into the texture.


Gemma Beeson and Peter Durrant were on form with the piano’s contributions, and there was a nice sense of stasis in the subdued moments before the final colossal outburst of C major. 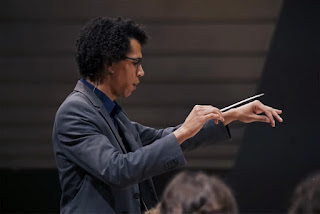 Posted by Robert Beale at 02:36 No comments: