Opera from the streets

Streetwise Opera is one of the most original of classical music groups. Last Easter, in Manchester – following work they’ve done in other cities for years – the group of top-level professional musicians, along with Harry Christophers and The Sixteen, presented a version of Bach’s St Matthew Passion at Campfield Market which included a whole chorus of local people who had experienced homelessness.


The show, co-produced with HOME arts centre, was televised on Easter Sunday, and many found it profoundly moving. Composer Sir James Macmillan wrote a ‘sequel’ to the Bach work, in conjunction with the Manchester Streetwise group, who came up with their own words for it.


They’d prepared for the event by working with the Booth Centre, the Mustard Tree and the Central Hall in Oldham Street, and some taking part found it a life-changing experience.


This year, at HOME itself, there are to be free performances, again by a group combining top professionals with people who have experienced homelessness, including a short new work by Manchester-based composer Anna Appleby, called Kingdoms Come and Kingdoms Go.


“I went to a workshop in London where we were inventing scenes inspired by Benjamin Britten’s Canticles – that was the work Streetwise did 15 years ago in its first concert. We devised our scene and I brought it back to Manchester, going to the Booth Centre, where the group put their own lyrics around it.


“What people will see is a five-minute opera scene, using words the performers themselves helped to write. There’ll be a lot of other stuff, too, to make a one-hour concert, including the excerpts from opera and musicals that the group learn at weekly sessions in the Streetwise project.”


Anna is a native of Newcastle upon Tyne who came to the Royal Northern College of Music after Oxford. She’s also Rambert Dance’s ‘music fellow’ this year, on an award that gives her the chance to work one-on-one with top choreographers.


“My great passions are writing for the stage and working in collaboration,” she says. “I’d like to write a full-length opera one day, and a full-length ballet.


“I am hugely inspired by Streetwise Opera’s ethos. Being a composer-in-residence and working with performers who have experienced homelessness combines my love of opera with my desire to amplify the unheard creative and political voices in our society.”


Streetwise Opera is at HOME, Manchester, at 7pm on April 11. 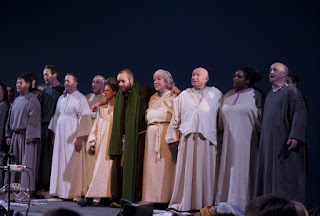