Clonter Opera is 45 years old – what began as a kind of summer party for enthusiasts sitting on bales of straw in a barn has become a north west artistic institution, with a purpose-built theatre and proven track record of providing real nurture for young singers as they begin to make their names in a demanding profession.


This year’s summer production of Don Giovanni is notable for the calibre of the production and music team behind it and the results they have achieved: Clive Timms is completing 10 years as music director and finally conducting his 75th performance here, with Robin Humphreys the long-time assistant music director and repetiteur, and Valeria Racco assistant conductor. Martin Lloyd-Evans has brought a fresh re-thinking of the story as director, and Nate Gibson has created an inspired design concept that neatly overcomes the problems of its varied settings (an issue that can easily defeat other designers).


We’re in the present day, or pretty near (mobile phones are much in use; one is the source Leporello consults for the ‘Catalogue’ aria of his boss’s sexual conquests in Act 1). Gibson and Lloyd-Evans have imagined the place as the USA, but it could easily be any other prosperous, soulless and fundamentally seedy Western society. The characters are nearly all genuinely young in years (that fits the Clonter casting), and what separates the powerful from the powerless is not so much aristocrat versus low-born as money and hypocrisy.


Don Giovanni would have a clear case to answer from the #MeToo movement these days: but how much are the victims of such a libertine complicit in moral failure themselves as they thirst for revenge, redemption or respectability, Lloyd-Evans asks. Perhaps his amorality carries more honesty than their conformity. In this view the homespun couple Zerlina and Masetto, in their attempt at a banal, Las Vegas-style wedding and enjoyment of simple, loving carnality, are the ones we should really admire …


The single set has two movable ‘walls’, with shutters that can each be closed or open to reveal a second view: evoking inside and outside, foreground and background, a bar, a club or a morgue with instant effect.


And the statue of the Commendatore, murdered at the outset and who finally answers Giovanni’s invitation to dine and then drags him down to Hell? In this case we see the man spookily re-appearing as silent Uber driver, barista or barman, and finally as a corpse that moves and a living head served up on a platter …


The singers are all technically excellent – some much more than that. Eliza Boom (Donna Anna) and Alexandra Lowe (Donna Elvira) are familiar to RNCM opera attenders, and each impressed here, the former for her passionate delivery of ‘Or sai chi l’onore’, the latter for the power in her singing, her believable characterization and a glorious ‘Mi tradi’ aria.


New to me was Alexandra Oomens (Zerlina), who deserves a medal just for wearing the crazily high-heeled boots she was kitted out with but whose acting and voice had life and loveliness; ‘Vedrai, carino,’ especially.


Of the men, Fabian Langguth rightly dominated the show, as the Don himself. He got the idea of the louche seducer perfectly, and his light baritone, endearing in his amorous songs and almost a croon in ‘Deh vieni all finestra’, converted itself to a convincing imitation of Leporello’s bass tones moments afterwards: there’s a lot yet to be revealed there.


Simon Grange, who was Leporello, has enviable resonance and a great comic gift, his face never still, which should stand him in real stead in the future. Andrew Henly (Don Ottavio) brought golden tone to ‘Il mio tesoro’, and Stephen Fort was finally imperious as the doom-beckoning corpse-Commendatore.


Masetto can sometimes seem a one-dimensional idiot – but in this production he’s a more regular guy and even a bit of a hero in his own way. Jacobo Ochoa has a fine baritone voice and acts, and reacts, very well. 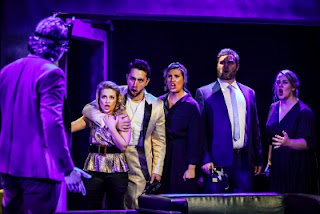