Another BBC Phil concert, another new concerto: this time the UK premiere of Wolfgang Rihm’s Horn concerto – written for its soloist, Stefan Dohr, who is, among other things, principal horn of the Berlin Philharmonic.


The piece is four years old, which makes it a surprise that it’s taken so long to make its way over here. Maybe that’s because hardly anyone else can play it (it includes both bottom and top notes which are officially beyond the range of the instrument), but Rihm is certainly an advocate who could hardly be bettered.


Twenty minutes in length, it has some lovely, long Romantic-style melodic solo passages, and some harmonies so reminiscent of the 19th century they almost sound like pastiche. It’s not all like that, but there’s a tonal undertow to it, which may be slightly ironic – especially given the little burp of a ‘tonic’ note with which the soloist ends proceedings.


Structurally it’s discursive: varied and episodic, with the only really traditional signpost being a kind of solo cadenza … but it’s one that opts out of the standard display formula and has the soloist become less and less assertive. Rihm is very taken by the way the horn can make a ‘distant’ echo of its own sound, and sometimes (including that passage) it seems to be duetting with itself (at others with the oboe, muted trumpets, or other eloquent melodists).


So its very much an essay in tone qualities, with a little disruption of traditional expectations built in. A great vehicle for a great virtuoso, of course. But the horn is very hard to play and there just aren’t that many of them around.


Conductor of the concert was the BBC Philharmonic’s principal guest, Ben Gernon – characteristically in cool control, letting the musicians play to their strengths. With guest leader George Tudorache and a few guest principals, they made light work of Wagner’s overture to Rienzi, which opened the concert: warm G and D-string playing, respectively, from violins and cellos on the big ‘prayer’ tune, and a lot of fun in the rum-ti-tum marching music. It’s portentousness writ large, and probably best just carried off with swagger.


Gernon was also in his element with Berlioz’s arrangement of Weber’s Invitation to the Waltz (or Dance if you prefer). His less-is-more approach was fruitful and there was a great rhythmic bounce in it (he even hoodwinked the audience into clapping before it had finished).


Then it was Beethoven’s Symphony no 7. Ben Gernon is right on the trend for crisp and lively speeds for Beethoven (and had 41 string players – one more bass than you might expect – and modern timpani), and in the second, third and fourth movements everything paid off really well. In the opening, ensemble was slightly ragged, but once into the Vivace (and the transition was smooth) there was little to complain of … except that in this particular acoustic and with these particular rhythms you really have to abbreviate everything to get the clarity you need. But every movement got applause, which Beethoven would no doubt have fully expected. 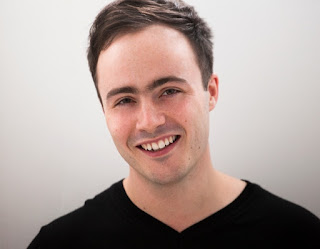 Posted by Robert Beale at 00:50 No comments: