Review of the Hallé filmed concert at the Bridgewater Hall, released 1st April 2021 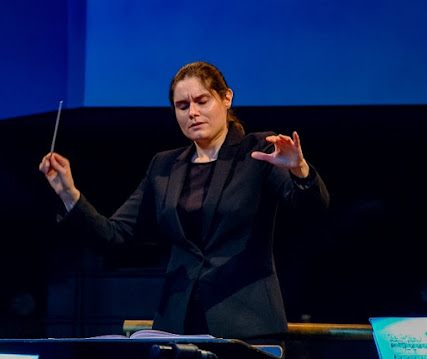 Delyana Lazarova conducts the Hallé in Manchester (credit The Hallé)

Breathtakingly talented, she also exudes personality, even on film, and though she might have hoped for more live concert-hall exposure as the result of her competition win and new two-year appointment, she certainly makes up for that in Episode 7 of the Hallé’s ongoing series of filmed performances for this lockdown season.

It is in fact her official Hallé concert debut, made in the same cinematic style in and around the Bridgewater Hall as the most ambitious of Sir Mark Elder’s concert films here, with Maestro Arts and Stephen Portnoi’s sound team giving us the same quality product to watch at home. (The subdued lighting of the last film in the hall has been turned up enough to let us see the players properly without losing that sense of atmosphere that dimness engenders).

Delyana Lazarova has the technique of musical direction at her fingertips: a clear beat and communicative gestures, with an expressive face (and a smiley one), and even her eyebrows convey meaning. More than that, she injects energy and tension into music that needs it, and calm and relaxation into the other sort.

Sir Mark talks about her qualities in the conversation-piece clip that begins the film, referring to her control and poise (there’s a brief excerpt from her competition-winning performance with the orchestra at Hallé St Peter’s just over a year ago) – and also the sense of passion that comes over in her music-making. I’ll go with that: the first piece in this programme is her own choice, the Overture by Polish 20-century composer Grażyna Bacewicz, opening with scurrying strings (led by Paul Barritt) in celebratory style and introducing an eloquent and still passage for wind players before its return to liveliness. It was wartime secret-drawer music when it was written (1943, under occupation), but what a spirit of hope and courage it catches – one that Delyana responds to with zeal.

She talks as enthusiastically and urgently as she conducts, bridging the gap between the Bacewicz overture and the Suite from Aaron Copland’s Appalachian Spring music.

(It’s the 13-instrument version, the soundworld of the original ballet, incidentally the same one that Manchester Camerata members filmed and recorded in the Stoller Hall in January for Radio 3 and released as a one-day-only stream on 24th February).

The Hallé principals and soloists (and notably Gemma Beeson on piano) play with tenderness and affection for Delyana Lazarova, producing a delightful and sweetly evocative sound – the Bridgewater Hall acoustic helps what is effectively a chamber music score to take a mellow tinge, like a stage performance seen through a gauze. The conductor has just told us she’s going to ‘let you see those characters and hear the story’ of the ballet, and she does just that, with the ending of the bride-and-groom interlude lovingly caressed.

Our concert-film continues with oboe Virginia Shaw, trumpet Tom Osborne, percussion Erika Őhman and Delyana herself briefly introducing Shostakovich’s Symphony no. 1 – a piece for these challenging times, as Virginia puts it. It’s also one of those major works the Hallé has the credit for premiering in the UK (under Harty back in 1932).

If its overnight success in the Russia of 1926 has one simple explanation, it could be that it was pretty advanced music that was not just clever but also moving. Delyana Lazarova presents it with a twinkle in the eye but with a darker presence also, the central movements giving opportunities for solo virtuosity in the orchestra to shine, and by the end her interpretation provides a degree of gravity in the orchestra’s playing that may not have been noticeable before but is deeply impressive.

Posted by Robert Beale at 01:52 No comments: