Review of Retrospect Opera's recording of 'Raymond and Agnes' 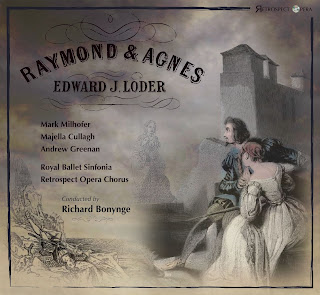 I’ve been listening to the first full recording of Raymond and Agnes, an opera that gives Manchester’s oldest theatre its place in musical history. It’s been achieved by Cheshire-based Retrospect Opera, with the Royal Ballet Sinfonia conducted by Richard Bonynge, CBE. Soprano Majella Cullagh is the heroine Agnes, tenor Mark Milhofer the hero Raymond, and baritone Andrew Greenan is the evil Baron.


The Theatre Royal in Peter Street – long closed for stage performances – was for many years the city’s home for top-class drama and opera. Built in 1845, it saw the likes of Charles Dickens, Henry Irving and George Cruickshank tread its boards, and in 1854 Charles Hallé collaborated with the composer and conductor Edward Loder on one of the most ambitious opera seasons the city has ever known, before or since.


Loder spent most of his career in London and had some notable successes there, but from 1851 to 1855 he was resident in Manchester, as the first purely baton-wielding conductor at the Theatre Royal – previously the orchestra, like many of the time, was directed by its violinist-leader, Charles Seymour.


He and the pianist-conductor Hallé (who had similarly taken over the Gentlemen’s Concerts orchestra directorship from Seymour a few years earlier but was yet to found the orchestra by which he’s mainly remembered today) gathered a company of top international operatic singers at the theatre through the autumn of 1854, and Loder brought to completion the opera that has since been described as his ‘masterpiece’ – Raymond and Agnes. It’s a Romantic work in ‘gothic’ style, based on part of the famous novel, The Monk, by Matthew Lewis (written in 1796).


But Loder never got it on the stage in 1854 – the Crimean War got in the way, blighting the entire opera season, according to Hallé in his memoirs written some time later – and its premiere the following year, with lesser stars, was hardly noticed. I’ve written about this, and Loder’s career in Manchester, in ‘Manchester Sounds’ and elsewhere (see ‘Opera in Manchester 1848-1899’ and ‘E J Loder, Charles Seymour and music at Manchester’s Theatre Royal 1845-1855’) at http://manchestermusicalheritage.blogspot.com/).


It’s a sad story, because there’s every sign that Loder thought he was writing for soloists of exceptional gifts, and in the event he had to make do with the Manchester ‘regulars’ who were also billed for comic operas and suchlike. But Raymond and Agnes is still the only serious opera of real merit ever to have been composed, rehearsed and premiered in the North West of England, and Retrospect Opera have done us all a service with this recording – it’s of the three-act version later performed in London, whose score is the only one that survives, rather than Loder’s four-act original, but I doubt that much was lost in the adaptation.


I wouldn’t be the first to point out that the quality of Loder’s music was not matched by the quality of the libretto, which he got from one Edward Fitzball before he moved north. Fitzball was the go-to man for sensational popular ‘gothic’ drama scripts at the time, and tastes have changed a lot (Gilbert and Sullivan gave them a real send-up in Ruddigore).


One almost wishes that Fitzball’s convoluted lines had been written in another language – then a clear and natural-sounding English translation could have been made and we’d have been spared his tortured syntax. For all I know, some opera classics may sound just as artificial in their original languages, but most of us would never know it when we read today’s surtitles in the theatre or hear a modern translation.


But it’s the music that counts, and Loder – though the quality of his writing varies – at his best is a very good dramatic composer indeed. His chief model may have been Weber’s Der Freischütz, but I’m convinced he knew his Donizetti and some Verdi, too, and his work needs only committed interpreters and skilled performers to spring to life again.

You can get the CD set from Retrospect Opera here.

Posted by Robert Beale at 03:21 No comments: