When this last concert of January was first planned by the Hallé and their partners in our Manchester Beethovenfest (probably around two years ago), it can hardly have occurred to anyone that the strains of the Ode to Joy setting in the Choral Symphony would be heard on the eve of the day we left the European Union.

Some in the audience were aware of it last night, though, and it was hard to tell whether the standing ovation which greeted the end of the piece was purely in tribute to a great performance (though it was) or also in memoriam of an era of shared European identity.

It was good to see a sell-out concert at the Bridgewater Hall again, anyway, and to hear the ‘Manchester roar’ that Charles Hallé used to be familiar with, again arising from the assembled throng. Members of the Association of British Orchestras – whose presence helped to fill those seats – on their annual conference, did at least get a sample of what we do best.

Sir Mark Elder mixed some slightly less familiar Beethoven in with the box office draws for this programme: the Elegischer Gesang, performed by the Hallé Youth Choir (with members of the RNCM Chamber Choir) and strings of the orchestra, being one serendipity. They brought lovely mellow tone to this most mellow of farewells.

The Hallé Choir gave us the final Angels’ Chorus from Christ on the Mount of Olives, too. The whole oratorio is coming on 9th April, so it was a trailer – sung with such dramatic levels of contrast that the vocal lines were down to whispers at times, but an appetizer without doubt.

Drama is what Sir Mark does superbly well, as the opening Leonore no. 3 overture demonstrated. Its initial bars were distant and mysterious, with palpably unnerving stresses; its first main theme thrilling in its optimistic energy; the scene of the distant trumpet calls well caught in its hymn-like confidence combined with jittery unease. And in the later section we heard a sparky solo from the Hallé’s new principal flute, Amy Yule – her colleagues the leaders of oboe and bassoon were to shine alongside her equally in the Ruins of Athens overture later.

The Ninth Symphony is one Sir Mark has conducted on a number of big occasions in the past with the Hallé. This was one of the best, as its tantalizing sense of anticipation – grim and anxious in the first movement, busy and cheerful in the second, serene and exalted in the third – led to a finale that was multi-faceted and heartfelt. The four soloists (Elizabeth Atherton, Sarah Castle, David Butt Philip and Neal Davies) were placed behind the orchestra just in front of the chorus, which lent their voices a kind of aural halo, and the playing of the Hallé Orchestra, led by Zoe Beyers, had all the contrasts of crispness and sweetness Sir Mark evokes from his players so well. Yes, it was a great performance. 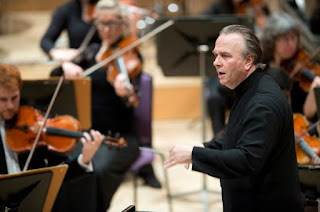 Sir Mark Elder with the Hallé


I doubt there were many listeners for whom the really memorable thing in Saturday’s BBC Philharmonic concert was not The Lark Ascending, Vaughan Williams’ exquisite little tone poem of English open-air tranquillity.

That its violin solo was played with a kind of pristine purity by Jennifer Pike was part of the joy of it. A lark, after all, just sings: it doesn’t do ‘expression’ or Romantic emotion. And yet the warmth of tone from her D string was a wonder in itself – and the others equally beautiful.

But the piece itself simply grabs you with a few phrases that keep coming again and again: not literal birdsong, but like birdsong in their guileless repetition.

Anna Clyne’s Night Ferry, an English creator’s work around 100 years newer (written in 2012) and already promoted to the BBC’s Ten Pieces orchestral pantheon, shares that characteristic. She’s brilliant at repetitive units (ostinati, I guess) that give you something immediate to recognize and hang on to in the welter of sounds that make up her score. And there’s plenty of information as to what it’s about – she writes of poems describing a voyage at sea (a raging one, at the outset, it seems), and she made a collage picture to describe the same sort of experience of mood swings as she’s illustrating in  her music (a copy for everyone supplied with their programme booklet).

‘Gewaltig viel Noten’, as Josef II once said of another composer’s work. Under Ben Gernon’s direction the Philharmonic worked conscientiously through what was also, to some extent, designed to be a demonstration piece for large orchestra.

Berlioz’ Symphonie Fantastique was an interesting contrast. It’s also written for a big orchestra to play, and also tells a story – one of the first works that sounds as if it’s written for the theatre but is actually a concert piece. And it’s also trying to uncover aspects of unhappy mental experience. It goes without saying that it was played with vigour and enormous impact, though perhaps there could have been room for some more subtlety in balancing the brass, string and wind cohorts along the way. 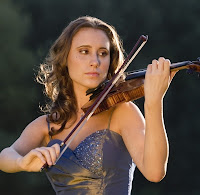 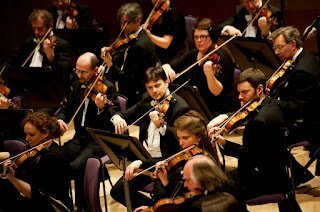