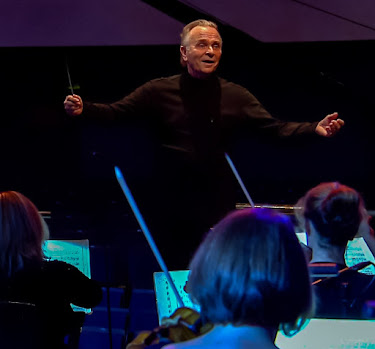 Sir Mark Elder and the Hallé

The Hallé was back playing for a live audience in the Bridgewater Hall – and what a sense of achievement that simple fact gave.

Sir Mark Elder told the evening audience (the second of the day) how much the orchestra had missed them. We’d missed seeing the band in person, too, but it surely raised their spirits to see most available seats filled and a standing ovation at the end, instead of just microphones and film cameras. A Thursday night reception for the Hallé’s music is, after all, something in Manchester’s lifeblood and has been since 1861.

If these were ‘normal’ times, we’d be seeing the Hallé Proms, and this concert and the ones to follow in the ‘Summer Season’ look in some ways like Proms programmes – but there’s been more to their planning than just providing a set of accessible, optimistically-charged orchestral pieces. There’s a bit of a Stravinsky commemoration built in, for instance, with both Petrushka and The Firebird figuring.

The first outing was certainly accessible and optimistically charged, though. Glinka’s overture to Ruslan and Ludmilla ensured that: Sir Mark gets just the right tempo to bring the bounding first tune (with a thrill of a crescendo on its upward scale) and the lilting second one both to life. And the full Petrushka score (1947 version) did that in spades, too, the opening Shrovetide Fair music, taken at a relatively steady pace, revealing secrets and details that aren’t always appreciable when the music emerges in slightly less rhythmically accurate form from a theatre pit, and later solo roles in the orchestra including sweet and winsome flute playing by Amy Yule and impactful and exciting trumpets.

Elgar’s Enigma Variations have been a Hallé staple almost from the day they were written, and Sir Mark and the orchestra brought them to glorious life once again: the opening theme as much caressed as played, the characters of the ‘friends pictured within’ brought vividly to life, and Nimrod, the great slow movement, made the centrepiece it was surely always designed to be; the strings, guest-led by Magnus Johnston, producing wonderful tone.

Indeed, one of the most rewarding things about this concert was the sense of aural splendour that seems to come with hearing the orchestra in its newly distance seating plan on the much expanded platform, with the brass firing salvoes from above in what would usually be choir seats. It’s like listening in quadraphonics rather than stereo and almost a new experience in itself … perhaps one we’ll miss if and when we can return to what we once called normal.

A streamed recording of the concert will be available from 10 June: link www.halle.co.uk/whats-on/summer-2021-concert-1-stream/

Posted by Robert Beale at 01:32 No comments: