Review of the Hallé filmed concert at the Bridgewater Hall, released 11th February 2021 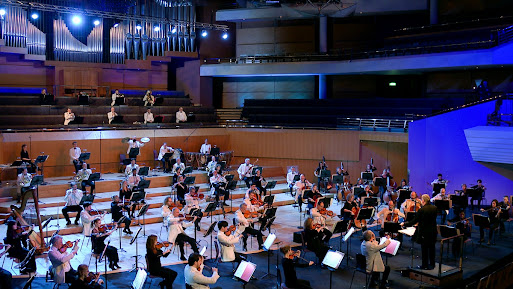 The Hallé with conductor Stephen Bell  credit The Hallé

‘Episode 4’ of the Hallé’s ongoing series of filmed performances is different from the ones the came before. It’s the only one so far to be programmed in the style of the Saturday Pops concerts that conductor Stephen Bell has made deservedly popular in recent years, and he is the maestro on the Bridgewater Hall podium for this, with the orchestra laid out in socially distanced seating on the massively enlarged stage.

‘Movie Classics’ is the title, and all the short pieces have been used on film soundtracks at some point (or several points), but it could just as well have been a typical classical pops programme – except that the linking comments by Petroc Trelawny are nearly all about the films, and so are the write-ups in the online programme ‘booklet’ … and even the one piece of filmed conversation (it comes just half-way through, to introduce Elgar’s Nimrod), between Stephen Bell and the Hallé’s permanent guest leader, Paul Barritt, starts off that way. They do go on to talk about the music’s own qualities, thank goodness.

There’s plenty to listen to here, nearly an hour and half in total, and it’s worth hearing even if you didn’t know the associations with both well-known and half-forgotten films.

The visual presentation, by the same team from Maestro Broadcasting that has brought us Episodes 1 to 3, is clearly on a different budgetary level from that provided for Sir Mark Elder’s concert: the lighting is relatively subdued, there are fewer camera positions and less ambitious editing, and some of the shots seemed to be of the soft-focus sort.

But there are two soloists (the orchestra politely applauds them and the conductor, to avoid the sense of anticlimax that might otherwise occur): the Hallé’s own principal clarinet, Sergio Castelló-López, and mezzo-soprano Nardus Williams, a young British singer who is on the brink of an international operatic career. She is a confident, superbly controlled classical singer with a warm tone and rich vibrato, already, judging by her career notes, well able to take roles of mature and powerful women on the stage.

The music varies from Purcell’s ‘When I am laid in earth’ from Dido and Aeneas via Handel’s The Arrival of the Queen of Sheba, Mendelssohn’s Wedding March for A Midsummer Night’s Dream, Verdi’s La Forza del Destino overture, Dvorak’s Song to the Moon from Rusalka and Ponchielli’s Dance of the Hours to the overture to Offenbach’s Orpheus in the Underworld (described in the ‘booklet’ as just the Can-Can, but including more tunes than that).

My favourites were the waltz from Tchaikovsky’s The Sleeping Beauty, showing the Hallé at its resonant best in its full-orchestra scoring, the slow movement from Mozart’s Clarinet concerto – I could listen to Sergio Castelló-López’s playing all day, in this or any other music, so beautiful is the sound he makes with a clarinet – the Blue Danube Waltz by Johann Strauss II (whisking us away to Vienna and the sound of another orchestra, which plays almost as well in the concert hall but got beaten by the Hallé when it came to football while they were both in Salzburg), Elgar’s ‘Nimrod’ from the Enigma Variations, which they have played for Sir Mark Elder often enough and somehow seems to retain his passionate frisson whoever is up-front, and Verdi’s ‘Sempre Libera’ from La Traviata, where Nardus Williams really comes into her own as a dramatic singer of fire and power. 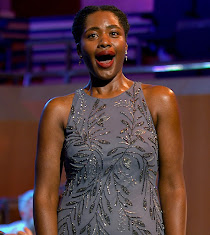 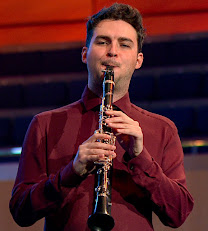 Posted by Robert Beale at 00:37 No comments: