Opera North have put a huge amount of resource into this new production of Martinů’s last opera (in the original, 1957-written, version).

It needs a long cast list – there are 19 named roles in the programme, and none is overwhelmingly more important than the others – and the chorus members have a vital role to play, because it’s essentially about two communities and they represent both.

The villagers of Lycovrissi are to present a Passion play (the imagery of the opening tableau, in Christopher Alden’s production here, is reminiscent of the Oberammergau play, now only a few months away from its next round of performances).

Roles are allocated, almost too precisely true to life: Yannakos the postman will be Peter; young Michelis will be John; Katerina, a widow, and Panait, her drunken lover, will be the Magdalen and Judas respectively. And the shepherd Manolios will be Christ.

Manolios takes his role seriously – he studies the Bible with the other ‘apostles’, and prepares to turn his back, at least for the time being, on marriage to his fiancée, Lenio.

Then village life is disrupted by the arrival of a crowd of refugees – they are not foreigners, but an entire uprooted community of fellow-Greeks, with their own village priest, who have been forced from their homes by the Turks. They need food and they need a place to live.

But the priest of Lycovrissi, Grigoris, rejects them and persuades his flock to do the same. Only Manolios and his fellow-disciples see them with compassion. The rest of the story works itself out as a real-life parallel to the rejection and killing of Jesus in the Passion story: in the end Manolios, having begun to persuade the villagers of the need to help those in need, is excommunicated and finally murdered.

It's a good tale – based on a novel by Nikos Kazantzakis, who also wrote Zorba the Greek and The Last Temptation of Christ. If you look for them, there are echoes of the Gospel all the way through: Ladas, the miser, tries to lead Yannakos astray like Satan tempting Christ; the schoolmaster Ivan Sharpe becomes a Caiaphas, pronouncing of Manolios ‘He’s dangerous, because no fault can be found in him’; before the final denouement, Manolios shares a parable with his ‘flock’ like Jesus’ Last Supper, and we hear that he is ‘… there, and in their midst’. The chorus even quotes from the Song of Songs in the introduction to the wedding scene (Lenio now having rejected Manolios and hitched herself with someone else), including the ominous line that ‘ … summer is ended, and we are not saved.’

Martinů, who wrote the libretto himself, saw opera more as a theatre of ideas than an unveiling of psychological truth. He didn’t write long arias to reveal his characters’ innermost selves. What he wanted was drama, and story-telling. He uses a narrator to introduce each act except the last (but twice within that one), and a kaleidoscopic variety of styles of music to accompany each scene, many of which melt into one another.

So this piece demands a lot from a director, and Alden, with designer Charles Edwards, has given Opera North a vivid, in-yer-face production with a message. Perhaps almost too much of a message … displaying ‘Give us what you have too much of’ in huge letters over the heads of the chorus as they represent the refugees certainly applies the moral of the story, but it should have sunk in, for anyone with ears to hear, anyway. The company’s Manchester Evening News Theatre Award-winning production of Martinů’s Julietta, staged over 20 years ago with Paul Nilon in the leading role, made us think, rather than battering us with its lessons.

It remains to say that the cast of The Greek Passion are all excellent, and not surprisingly, as they include many of the best experienced male singers Opera North works with – Stephen Gadd, Jonathan Best, Steven Page (as The Captain, a character who is the narrator but also morphs into such forms as the Easter Bunny and Father Christmas, the better to relate to us today), Paul Nilon, Jeffery Lloyd-Roberts, John Savournin. Young tenor Nicky Spence is also outstanding as Manolios, as is Magdalena Molendowska as the Magdalen character, Katerina: two magnificent voices used with great artistry.

Garry Walker, now music-director-designate of the company, conducts with a sure hand and there are some ravishly beautiful sounds from the orchestra along the way. 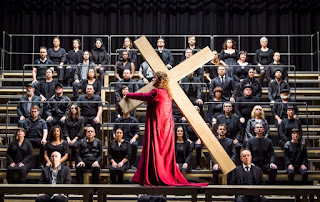 Nicky Spence as Jesus and the chorus of Opera North in The Greek Passion c Tristram Kenton
Posted by Robert Beale at 08:48 No comments:

Back after seven years, one of Opera North’s best productions of baroque opera returns, and with a cast that’s almost as universally strong as it was in 2012.
One of them – counter-tenor James Laing, as Tolomeo, the narcissistic, psychopathic, moody and lecherous baddie of the story (aka Ptolomy, to ancient historians) – indeed returns to his role, just as horrifyingly antipathetic as before.
The story is of Julius Caesar in Egypt. It opens when his erstwhile Roman rival, Pompey, has already been murdered by Ptolomy – the overture is accompanied by a helpful dumb-show in which we see him knifed by Tolomeo and his general, Achilla.
Ptolomy’s sister and incestuous queen, Cleopatra, however, not only is competing with her brother/husband for supreme rule in Egypt but also sets out to seduce Caesar. Pompey’s widow, Cornelia, and son, Sesto, are out for revenge, though Cornelia is desperately vulnerable to advances from both Achilla and Ptolomy.
It’s a long piece: Handel’s operas usually are. Most of the scenes are confrontations, and the emotions are strong but unvaried and strictly sequenced (that’s the concept of Affekt).
Given those constraints, any director has to use resources skilfully, and the production by Tim Albery does that. The set is a movable one in two pieces, but they come together and apart and work from different angles, so it can evoke inside and outside, battles and bedrooms (including Cleopatra’s famous bath, in an interior that, if not a burnished throne, looks like a highly burnished boudoir).
And the design concept gives the warring nations (Romans and Egyptians) colour-coding and vivid symbolic accessories, such as the Scissorhands-style nail extensions worn by Tolomeo. Credit Leslie Travers for those effects.
The singing, which is for virtuosic performers on all sides, is what counts. Maria Sanner as Cesare (one of two trouser roles for female singers here) is at her best in the more mellow numbers, and though she can hold her own for power when placed front-of-stage, isn’t always given that advantage. James Laing is icily nasty and sustains his energy even when his voice occasionally tires.
But the star of the show in many ways is Lucie Chartin, as Cleopatra. She turns on the sex appeal so much in the first part of the story that she’s in danger of making the character a saucy little tart, but she finds real dignity and pathos later on, turning Piangeró la sorte mia, sung from floor level, into a baroque equivalent of Tosca’s Vissi d’arte, and displaying technical brilliance in her trills and leaps in Da tempeste il legno infranto, as well as a warm mezza voce elsewhere.
And matching her for subtlety is Heather Lowe, one of the Royal Northern College of Music’s best products of recent years, as Sesto. She makes as remarkable a success of it as did Kathryn Rudge, another lovely RNCM high mezzo, in the original production.
And Amy J Payne, who took the role of Cornelia on Wednesday, gave a superb performance as Cornelia, full of emotion and vivid acting ability, and with sustained quality from beginning to end. Handel’s slow, lamenting arias, with the guiding hand of conductor Christian Curnyn, have never sounded better than this. 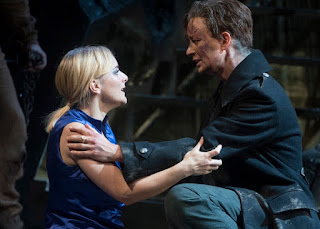 
Ever wondered what swarming bees, murmurations of starlings, a plague of locusts and night-time insect sounds are like when expressed in music?

Philip Grange has the answers. His Violin Concerto, given its world premiere by Carolin Widmann and the BBC Philharmonic under Ben Gernon, is explicitly about all those. The programme note spells it out: the world of swarms, flocks and plagues is mainly expressed by the orchestra through the single-movement work’s fast sections, and the night insects come into it in the context of the slower ones, where the violin has extended solos.

But there’s more. The point of these evocations of the natural world (which Philip Grange links with mammalian herds, as well) is to say something about the individual and the group – how we can think as rational individuals and at the same time find the ‘whim of the group’ counts for more. He even refers to ‘the current political landscape and the events that have led us to where we are’. I wonder if that was written on the assumption that something politically significant would have happened on 31st October last?

But back to the music. One of the more intriguing aspects of the Violin Concerto’s concept is that the solo has to struggle to emerge from the group – at times it’s quite submerged beneath the orchestral sounds, and the work ends with something very like a cadenza (briefly, but only briefly, accompanied), so that the solo finally triumphs by being completely on its own. That’s a new approach to the concerto tradition, and an effective one.

Prior to it, there are passages more akin to the old idea of ‘dialogue’ (for instance when the solo violin tries to dance, but the rest of the orchestra are too busy to join her), and the music offering soloistic display has some quite spooky noises for its accompaniment (Hallowe’en raising its baleful face again?). The sheer complication of the score makes it almost as much a concerto for orchestra as for the soloist, which may have been the intention all along.

Ben Gernon piloted the BBC Philharmonic through its complications with a sure hand, as he had for the opening piece of Stravinsky – the proto-opera/ballet/tone poem Song of the Nightingale, whose music was begun before The Firebird, completed after Petrushka, and finally launched shortly before The Rite of Spring.

No wonder it disappeared from view to some extent, and no wonder you keep hearing things that seem reminiscent of the other, more familiar, pieces. The story’s set in old China, and the musical chinoiserie (jingling percussion, pentatonic unison melodies – the usual stuff) does get a bit annoying. But it was played with considerable class, with distinctive solos from guest leader Igor Yuzefovich, principal flute Alex Jakeman and guest principal trumpet Aaron Akugbo.

(Incidentally, for observant programme readers who might have been alarmed: Peter Dixon has not retired as principal cello: Bozidar Vukotic was guesting in his place but got the wrong symbol attached to his name).

The second half of the concert was Tchaikovsky’s Symphony no. 1 (‘Winter Daydreams’). Gernon brought bold, emphatic style to the build-up of its opening movement, with eloquent pauses and springy rhythms, and there were surprises later on as well: a fierce and exciting development section of that Allegro, and a great island of sound in the unison horns’ theme in the Andante cantabile. The scherzo had something of the sort of delicacy a Mendelssohn scherzo should have; and the finale, setting a frenetic pace for Allegro moderato but gaining considerable weight by the end, was hugely enjoyable if a bit scrambly. I always enjoy Ben Gernon’s fresh takes on the warhorses, and this was no exception. 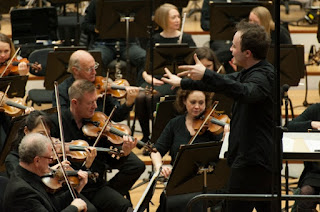 Carolin Widmann (left) and Ben Gernon with the BBC Philharmonic
Posted by Robert Beale at 08:09 No comments: