The Mid-day Concerts welcomed Belarus-born Olga Stezhko for a 40-minute recital of French piano music from the first third of the 20th century. She’s made that her speciality, and her sense of atmosphere and delicacy in Debussy, Ravel and Poulenc are an asset to the music in each case. She achieves most when she’s playing gently: every note has its weight and value precisely expressed, there are telling gaps in the sound tapestry as she weaves it, and even when she turns up the power there can be a kind of nostalgia in her playing – humour, too.

Her programme began with Book 2 of Debussy’s Images. ‘Cloches à travers les feuilles’ created a light wash of tone, with clear highlights but still a sense of shape and direction; ‘Et la lune descend sur le temple qui fut’ saw a fuller sound emerge, but that, likewise, vanished magically in a fade-away ending; and ‘Poissons d’or’ was dazzling and subtle at the same time.

Poulenc’s Trois Pièces pour Piano were a serendipity: ‘Pastorale’ almost similar to the Debussy in its mystery and esoteric harmonic effects, while in ‘Hymne’ she evoked a finely controlled sense of the unexpected. The final ‘Toccata’, by contrast, was an invigorating – and still controlled – workout.

She played nos. 2, 4 and 5 of Ravel’s Miroirs in a way that, for all its beauties, was bewitching. The birds of ‘Oiseaux tristes’ were definitely sad, ‘Alborado del gracioso’ was springy, fun and yet with a touch of longing, and ‘La vallée des cloches’ had a series of deep sighs in its phrasing.

It was an individual, technically accomplished and seriously felt response to music in which harmonic colour and impressionistic mood-painting count more than anything. 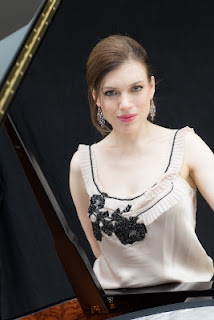 
It takes a big pianistic personality to make Rachmaninov’s second concerto sound fresh and different, but Boris Giltburg has that personality – and the ability to go with it.

His playing of it with Sir Mark Elder and the Hallé was arresting from the very first note – the bass played as a kind of clear grace-note to the first chord, with the formula repeated, at varying speed, on almost every subsequent one in that crescendo sequence – which made it all sound quite menacing.

That was followed by an emphatically ponderous way (at first) with the first theme that may have surprised even the accompanying orchestra a little. But that’s the way Boris likes it: deep and soulful in the big themes and dazzlingly brilliant in the helter-skelters. It sounds very Russian (he’s Israeli but born in Moscow) and perhaps a bit flash – but Russian music needs that element, too. Gloomy, beautiful and stunning all at the same time.

The Hallé’s wind principals made some superb contributions in their solos – Sergio Castelló López’ clarinet in particular at this stage, and in the second movement Amy Yule’s flute also: it was here that the tempo flowed much more smoothly and built feeling less hysterically. The orchestral details were beautifully articulated under Sir Mark’s direction, and with the violins, led by Eva Thórarinsdóttir, evoking expression and sustaining the mood to the very end.

The finale was every bit as impactful as the opening, with surging momentum and seriously scary pace by the end. Boris Giltburg (who undertook the assignment of this concert at short notice in place of Alexander Gavrylyuk) has built a big reputation playing Rachmaninov, and this performance showed why. His approach is never routine and presses the expressive power of the music to its limit – something his audience appreciated and loved.

They also surely appreciated the serene equilibrium and rhythmical alertness of Sir Mark’s reading of Ravel’s Le Tombeau de Couperin in its four contrasted movements. The smaller than full string body gave it crispness as well as a rich sound, the oboe (Stéphane Rancourt) and cor anglais (Thomas Davey) solos were eloquent, and there was a lovely burst of deep feeling from the strings in the Menuet reprise, while the final Rigaudon was both bouncy and poised.

Full forces were on parade for Prokoviev’s Symphony no. 7. It’s an ambiguous piece – superficially straightforward and tuneful, but with little touches of foreboding and unease (perhaps the most a good Soviet citizen felt he could say while Stalin was still alive). But the opening has a tinge of Shostakovich’s starkness, and the film-score-ish writing that follows is upended by spiky jollity. Even the ‘circus’ music of the last movement, though fun, comes near to irony, and the solemnity that ensues sounds almost like sarcasm. Sir Mark and his players made the orchestral sound glitter, but were always alert to the sombre tones also in the mix. 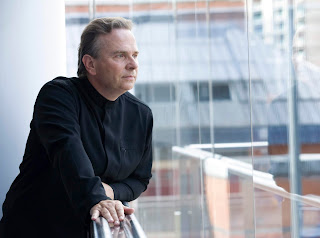 Posted by Robert Beale at 01:22 No comments:


At first sight, putting Myaskovsky’s sixth symphony into a programme immediately following the Hallé’s performance of Beethoven’s ninth might seem an inspired comparison. Both have four long movements, and in both cases the last is a choral one.

But in Myaskovsky’s the choral part is actually optional – putting words to the tune of an Orthodox chant that could stand on its own if necessary – whereas you could hardly say that the words are optional in Beethoven’s case.

I was glad that Vassily Sinaisky presented the 1923 symphony, though, because it’s a work with a voice all its own. Epic, in the post-Mahlerian tradition of being a journey that crosses many territories, it also seems, subtly, to speak to the Russian nation’s soul in the way that many of Shostakovich’s symphonies did.

Maybe Myaskovsky was defying political orthodoxy in one way, because it’s not the conventional darkness-to-light symphony that was routinely expected in his time: there’s a Dies Irae in the final movement, and the chant is a funerary one, after all, despite the previously dominating themes of jollity, using songs of revolutionary fervor. But on the other hand he gets quotations from the death of Boris Godunov and the end of Tchaikovsky’s sixth into his first movement, not his last, and right at the end there is a clear impression of serenity.

At least there was in Sinaisky’s interpretation, which was as rich and many-layered as the work itself. Its slow movement contained some seriously beautiful playing from the wind soloists of the Philharmonic, as the strings, led by Yuri Torchinsky, were soulful in their expression also.

Soloist in Szymanowski’s Violin Concerto no. 2 was Liza Ferschtman – not Tasmin Little, as originally planned, but what a superb substitute. She responded to the varying emotions of the piece with both dreaminess and fierce attack, dispatching the mid-work cadenza with panache, and playing the long lyrical interludes of the second part gorgeously, matched by some purple tutti passages from the orchestra near the end.

She followed this display with another of technical skill in the service of beauty: Ysaÿe’s solo sonata no. 5, first movement.

The concert opened with Rimsky-Korsakov’s music: two scenes from The Golden Cockerel ballet. It was an attractive appetizer, with the familiar Wedding Procession tune built up to effectively and then rumbustiously played, at least in intent. 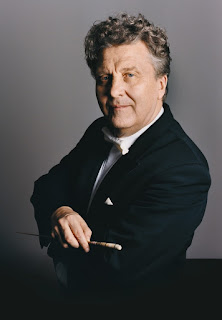 Posted by Robert Beale at 01:16 No comments: