The Northern Chamber Orchestra welcomed Martin Roscoe as piano soloist for its concerts at the weekend, in the Stoller Hall at Chetham’s on Friday night, and the Heritage Centre in Macclesfield on Saturday. I heard the second of those.


It was a kind of celebration of International Women’s Day, as one of the four items on the programme was written by a woman, and another was inspired and popularized by one. That lady was Clara Schumann, muse, sweetheart, wife and eventually widow of Robert Schumann, whose 200th birthday is this year – and the work was his Piano Concerto in A minor.


Before it we heard Gounod’s delicious Petite Symphonie for wind instruments, a delicious bit of Mendelssohniana well chosen to put the NCO’s wind players in the spotlight. They were expertly led by flautist Conrad Marshall, but much of the music’s magic and eloquence comes from the first oboe part, beautifully played by Kenny Sturgeon. In fact the third and fourth movements need soloistic virtues and warmly integrated textures from everyone, and it was a great example of choral-style teamwork all round.


The Schumann concerto is an evergreen, and it was good to hear it in acoustic close-up, as you do in the Heritage Centre’s auditorium. Martin Roscoe never lets his sense of momentum falter, and the Romantic qualities of the first movement were kept under proper restraint, while the ‘grazioso’ of the second was felt from the outset. The finale was a rumbustious (and mainly accurate) romp.


The 20th century Polish composer Grażyna Bacewicz wrote her Concerto for String Orchestra in 1948, and its three movements give its players plenty of energetic writing to dig into (‘We love it,’ said NCO leader Nicholas Ward in his introduction). To me it’s reminiscent of Bartok’s Concerto for Orchestra more than anything, but there are some scrunchy multi-voice harmonies which at times seemed to demand a bigger body of players than the NCO is able to provide. The final movement brought quality solos from Nicholas Ward and others.


Mozart’s ‘Haffner’ symphony (no. 35) closed the evening in high spirits. It was a bright and breezy way to say farewell to the orchestra’s general manager of the last few years, Tom Elliott, who’s moving on to pastures new, and its energy, virtuosity, precision and fun epitomized much of what the NCO has always embodied in its playing. 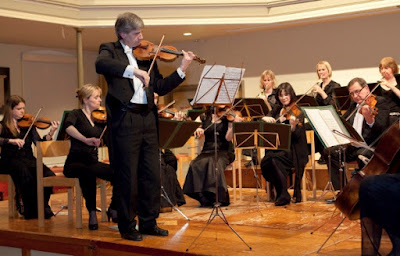