Review of the The Manchester Peace Song Cycle at the RNCM

‘These Days – The Manchester Peace Song Cycle’, to give it its full name – was a staged song cycle about Heaton Hall and particularly its story in wartime, performed as a special private event last Sunday in the hall itself and getting its official world premiere last night at the Royal Northern College of Music.


It’s remarkable example of collaboration, as perhaps only Manchester can do it, inspired and realized by Caroline Clegg and her Feelgood Theatre Productions company, who have a role all their own in the present re-enlivening of the hall as a piece of our city’s heritage.


There are nine composers (all women), and the texts are nearly all by Tony Walsh. The performers included children from Cheetwood Community Primary School and the Hallé Youth Training Choir, with soprano Jenny Carson, tenor Christopher Littlewood and Joseph Jordan as actor and sometime narrator, and a five-piece instrumental ensemble.


It was presented with some superbly researched visual imagery projected above the performance space, and with actor and musicians all in costume and the children’s choirs – excellently prepared and directed, and conducted by Thomas D Hopkinson – fully using the auditorium’s capacities, it made for an absorbing and very moving experience.


On one level it was a good piece of story-telling, with a linking thread being the two great sculpted lions which lie recumbent outside the back of the hall’s central block – just think what they have seen, we’re invited to imagine as events from the past are re-enacted before us. The children sing about them (‘You can even ride the lions if you dare’), and they come to life near the beginning, as Amelia and Arthur, with shaggy-collared coats and represented by the two singers. A lyric, ‘These Days’, by Tony Walsh, recurs to bring the survey of their memories to a thoughtful close.


I was particularly interested in the new songs which are at its musical core. Writing songs is rarely considered the peak of composerly skill in today’s ‘classical’ circles, though in the rest of the universe the word ‘music’ seems to be equated almost totally with recorded song. These miniatures showed that in Manchester at least we have some real talent for song creation among the other skills expected of trained practitioners.


Lead composer is Nicola LeFanu, and several of the children’s songs are her work: well judged to fit the two choruses, both in their level of sophistication and technically, with the Hallé youngsters rising to considerable challenges.


Ailís Ní Ríain has written a series of cello solos which accompany narrative, there are trumpet motifs by Freya Ireland, while Emily Howard’s music for The Malaya Emergency, from much nearer the present and accompanying archive film, had the unenviable task of reflecting a particularly gruesome description of killing in combat. The other songs are by Anna Appleby, Lizzy Gür, Lucy Hale, Emily Howard, Freya Ireeland, Grace Evangeline Mason and Carmel Smickersgill.


Lizzy Gur’s Willy Grimshaw’s ’Orn (about the public demonstration of the gramophone by William Grimshaw in Heaton Park in 1909) was a lot of fun with some mad ragtime in its instrumentals, and Carmel Smickersgill’s Take Me was a mock recruiting song from the First World War part of the park’s history, full of sadness and one that changed the atmosphere of the entire show. Freya Ireland’s The Lucky Ones (about the RAF training of the Second World War) had a fascinating mini-ensemble sound – a lot from a little.


But the ones I found most powerful were Lucy Hale’s Kisses, Crosses, Losses, a slow, keening lament that continued the story of the 1914-18 tragedy, Anna Appleby’s Disabled, an unaccompanied setting of Wilfred Owen that formed a pivotal point in the evening, and Grace Evangeline Mason’s Lifted, an interlude of simple innocence that did what the title said, with eloquent melody, as a child describes the joy of solitude and the open freedom of the park. That was one that stayed with me. 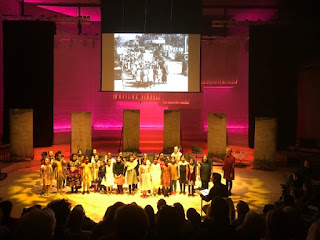 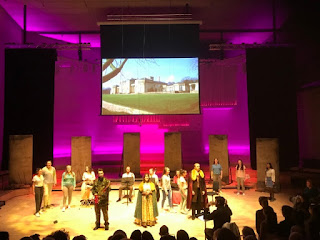